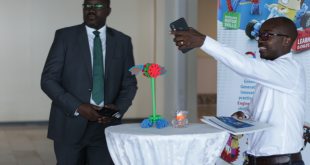 On February 18, the beautiful Lowena Mwiza turned 9 and our team felt it was important to try out one of our best menus- a LEGO Birthday party- for her.

A LEGO Birthday party is an ordinary birthday party but the difference being that this time, the children are occupied with building models out of their own imagination of what a typical birthday should look like.

Rather than spend time jumping on bouncing castles, children attending a LEGO Birthday party get a chance to learn basic science principles while building models and playing with them.So, on this day, Lowena invited her friends most of whom had never heard about Young Engineers before.“I wanted to surprise them with something different and memorable,” Lowena tells YE News desk.The Young Engineers team, organized a special LEGO Birthday at Lowena’s home in Butto, Bweyogerere, West of West Kampala City.

The fun moment that attracted about 50 kids, involved building models, spinning the fortune wheel, being asked fun questions plus playing with the models they had built. To ensure that the kids enjoyed every moment of it, they were separated in age groups.The children between 4 and 6 sat differently from the older ones.

After building, the children had a short break where Lowena served them with tasty snacks and drinks.Following the break, children were involved in the game of the day, which was a Wheel of Fortune, which the children would spin first and then be asked questions set by the birthday girl.

“A fortune wheel is a concept of ancient philosophy referring to the unpredictable nature of Fate.” In this case the unpredictable nature was in form of colors matched to the kids’ questions. The child spun the wheel randomly, changing the positions of those on the wheel and if they got the question right they would walk away with a big candy.After all this, the birthday girl cut and served a LEGO cake with her friends.

The parents loved the idea as most of them confessed that it was the first time for them not to get much disturbance from the children, as they were kept engaged in different activities all through the party.

If you would like to surprise your child with an awesome LEGO Birthday party, please follow this link Lego Birthday to order for a Lego Birthday.